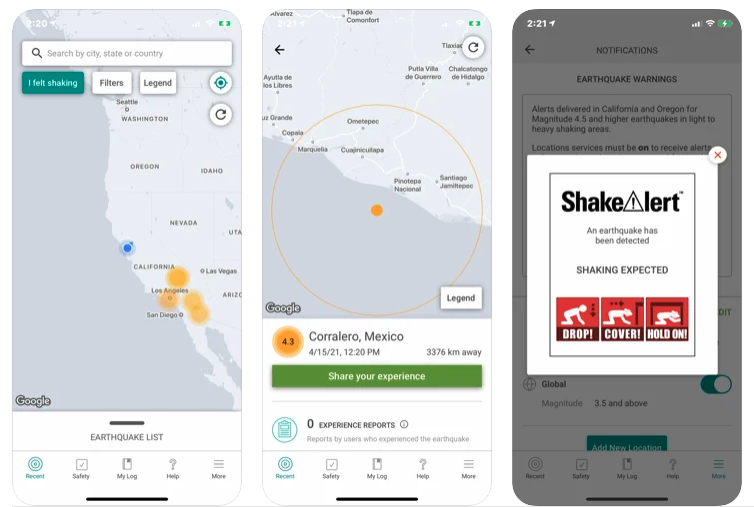 Washington state residents have another way to be alerted to an earthquake and potential tremor with the arrival of the MyShake app, a service that was previously only available in California. and in Oregon.

The free app, designed by seismologists and engineers at the University of California, Berkeley, is available for iOS and android devices and is intended to provide seconds of warning to users after an earthquake is detected and before a shaking occurs.

The app uses the ShakeAlert automated system managed by the US Geological Survey in partnership with the universities of Washington, Oregon, California-Berkeley and Caltech. This system uses ground motion sensors in all three states to detect earthquakes that have occurred and automatically warn people to “drop, cover and stand”.

ShakeAlert warnings have been live in Washington State since last May, but only for Android users and those who receive warnings from the Wireless Emergency Alert System (the same system that produces AMBER Alerts) .

MyShake brings a third option to alert people, and it is said to deliver its warnings faster than WEA, which was not designed for speed. According to the UW Pacific Northwest Seismic NetworkMyShake has been proven to deliver alerts within five seconds or less after the USGS reports an earthquake detection.

ShakeAlert does not predict earthquakes before they happen, but is designed to quickly detect earthquakes that have already started. Ground motion sensors near the earthquake sense the ground shaking and transmit this information to a data processing center. The precise location of the earthquake is determined and ShakeAlert algorithms quickly estimate the strength and areas likely to shake.

The MyShake app has been downloaded over 1.6 million times since its launch in late 2019. More recently, the Earthquake Early Warning System alerted around half a million phones, for example a magnitude 6.2 earthquake near Petrolia, California on December 20.

UW’s PNSN noted that the availability of the MyShake app in Washington comes on the 322nd anniversary of the 1700 Cascadia subduction zone earthquake.

Learn more about the three different alert options and get instructions on how to activate them.